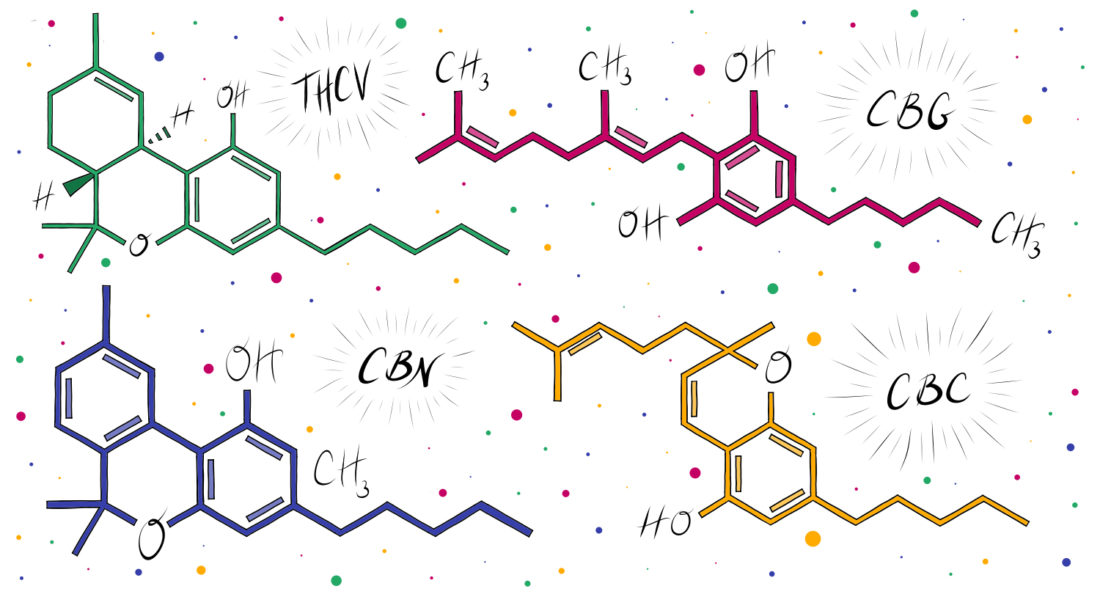 Lately we’ve been hearing about the therapeutic potential of the cannabis plant’s lesser-known compounds CBG, CBC, CBN, and THCV. These cannabinoids are already being marketed as active components in all sorts of cannabis products, from vape cartridges to transdermal patches and even capsules.

Beyond these kinds of processed products, even the labels on regular ol’ flower will begin to feature more minor cannabinoids as labs begin to test for a broader spectrum of compounds. So here’s a quick introduction to get you acquainted with the new cannabinoids on the block.

If you’re curious about CBG (cannabigerol), we wrote a whole post about it. You can read it here.

CBC is the result of a recessive gene, making it a fairly rare feature in most cannabis varietals on dispensary shelves (for now). Owing to its rising popularity, many breeders have managed to significantly boost CBC production through extensive cross-breeding techniques aimed at increasing the inheritance of said recessive gene.

In pre-clinical studies, CBC has been shown to have significant anti-inflammatory effects. CBC also does not bind to the CB1 cannabinoid receptor, which means it’s non-intoxicating. It does, however, agonize CB2 receptors, which are associated with inflammation and immune response. This allows it to “potentiate the analgesic effects of THC” — that is, strengthen its pain-relieving properties. One study suggests that CBC might have antidepressant effects similar to that of CBD.

It may one day prove useful in the treatment of inflammation and pain, especially when combined with CBD and THC. It has a boiling point of 220˚C/428˚F. If you happen to find a varietal with some CBC content, crank up your vape pen to the highest heat setting to vaporize it.

CBN is an oxidative byproduct of THC. This means that when THC degrades (via oxygen and/or light), it becomes CBN. During the transformation, the molecule loses much of its psychotropic potency: CBN is only about ¼ as psychoactive as THC, making it useful for folks who may need THC for sleep but find THC alone to be too psychoactive.

The jury is still out on whether or not CBN is in and of itself a sedative compound– in a Shaping Fire interview with host Shango Los, Dr. Ethan Russo suggests that perhaps we only make this association between old, sleepy-feeling flower and CBN because only terpenes like myrcene (another notoriously sleepy compound) can survive long periods of time without degrading.

Apart from its potential as a sleep-promoting agent, CBN might be a good additive for topical application. Some early studies have suggested it may be useful in treating conditions like dermatitis (due to its antibiotic properties), psoriasis (as it acts on keratinocyte proliferation), and burns (as it acts on TRP channels, which are our bodies’ heat sensing receptors).

Finding what works for sleep takes some trial and error. If you haven’t yet, try combining CBN with myrcene, CBD, or THC in flower or any other form. CBN has a boiling point of 185˚C/365˚F. A medium to high heat setting on your vape should do the trick.

Often found in South African landraces like Durban Poison, this cannabinoid is gaining popularity for its pre-clinical potential as an appetite suppressant. Most recently, a study conducted on rats established interest in THCV as a potential addiction-combatting agent: the study noted that THCV “significantly attenuated” nicotine seeking behavior and withdrawal symptoms in a model of nicotine dependence.

THCV might just be a promising candidate for treatment of metabolic conditions like type-2 diabetes and obesity in the future, but more research needs to be done before we can say for certain. In the meantime, look for THCV content when you need a zippy, concentration-enhancing boost. This compound has a boiling point of 220 °C/428 °F. Crank the heat up to the highest setting to release this one.

(2017) Cannabis Pharmacology: The Usual Suspects and a Few Promising Leads

Podcast: Cannabinoids and Terpenes in Detail with Dr. Ethan Russo